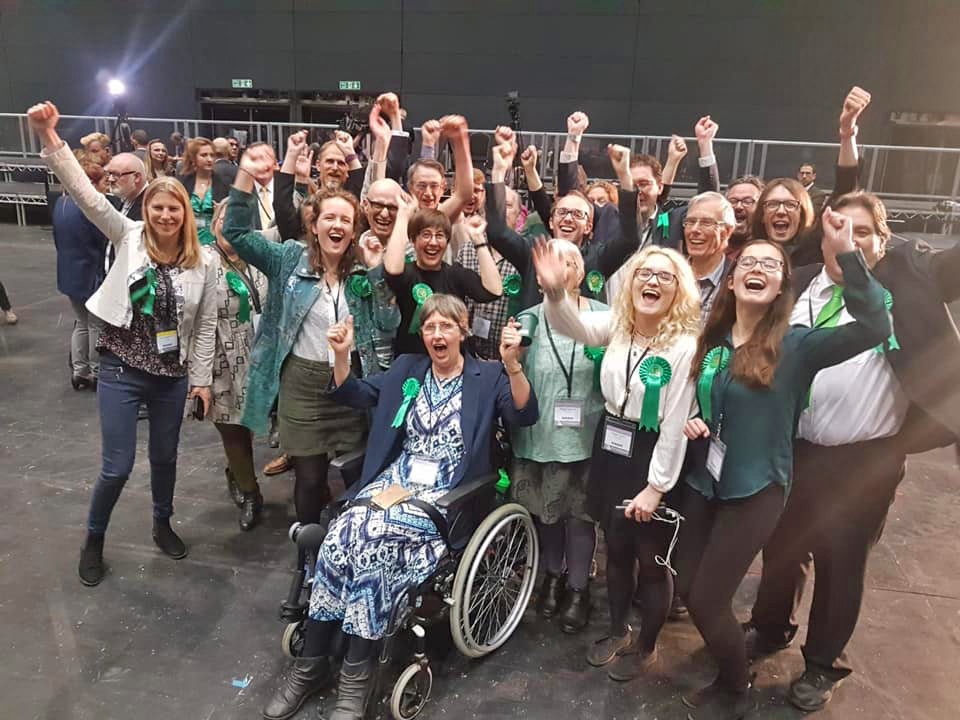 Manchester Green Party celebrated a spectacular election result last night after the North West of England elected its first ever Green member of the European Parliament.

Gina Dowding, a Green councillor on Lancaster City Council and Lancashire County Council, was elected as the fifth of the region’s eight MEPs on a night that saw the Green Party finish third in Manchester – ahead of the Brexit Party – with just under 20,000 votes.

Overall, the Greens took fourth place in the North West, finishing ahead of the Conservatives with 12.48% of the vote.

Gina Dowding, the North West’s newly elected Green MEP, said: ‘It’s absolutely clear that people want change – and they have voted for positive change by electing a Green MEP: yes to staying in the EU, but also for action on the climate emergency.

‘It’s clear to me that people know they can trust the Greens on our policies that will help reduce carbon emissions, create jobs, tackle inequalities and reduce poverty.’

Gina’s success was mirrored elsewhere in the country as The Green Party saw its number of members of the European parliament in England more than double, rising from three to seven.

The Green Party also saw its first ever Brussels representatives elected in the Eastern, West Midlands and Yorkshire and Humber regions, while the party retained its seats in London, the South East and the South West.

Nationally, the party again finished fourth in the total vote, placing above the Conservative Party – the first time the Greens have ever beaten the Tories in a national election.

Sian Berry, co-leader of the Green Party, said: ‘Following on from our spectacular local election results where we more than doubled our representation, tonight’s result is proof of the size and power of the Green Wave that is sweeping across the country.

‘Our message of “Yes to Europe, no to climate change” clearly resonated strongly with voters, many of whom will have been casting their vote for our party for the first time.

‘We topped the poll in Bristol, Norwich and Brighton and Hove, and scored brilliant seconds in Sheffield, Cambridge and Oxford.

‘We’ll be sending a wonderful team of people to Brussels who’ll be working for the transformation of our society so that it delivers the promise of a social Europe, one that cares for and supports its people, while living within the physical limits of our one fragile planet.’

Last night’s result shows clear public support for the UK remaining in the European Union, but also for tackling the causes of Brexit, such as the damage caused to communities by austerity, tax-dodging and the dimunition of workers’ rights.