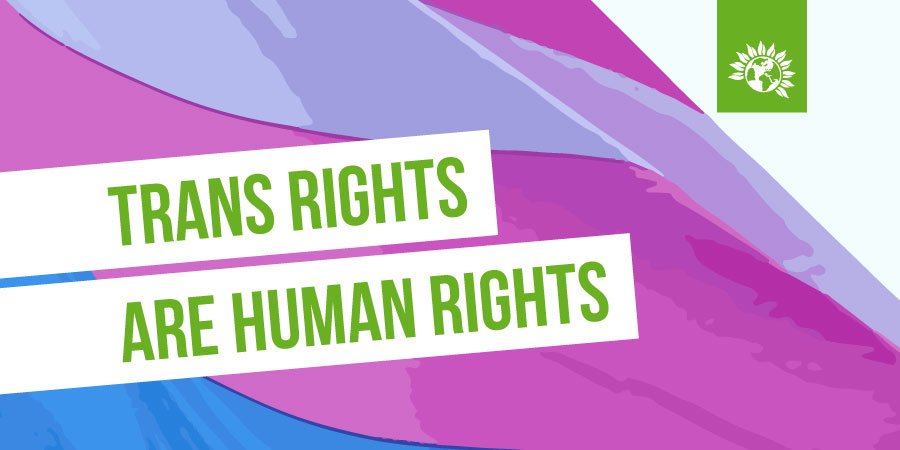 At its 2019 AGM on the 23rd of November – just after the Trans Day of Rememberance and Trans Awareness Week – Manchester Green Party has adopted a motion re-affirming support for, and solidarity with, its trans and non-binary members, activists and the trans and non-binary people it seeks to represent.

The motion was largely inspired by the work of the Scottish Greens at their Autumn 2018 national conference, and was proposed in response to growing concerns around transphobia both within the political sphere, mainstream media and society as a whole. As well as affirming support for trans and non-binary people, Manchester Green Party also calls on other regional and national bodies within The Green Party to take robust action in addressing transphobia at all levels.

Manchester Green Party would like to thank members of Trafford Green Party and LGBTIQA+ Greens for their work in developing and approving the motion’s text, which reads as follows:

“Over recent years and months, transphobic and trans-exclusionary rhetoric has dramatically increased across broadcast and print media, can be found on many mainstream websites, and is widespread on social media. Transphobic opinions have been expressed by elected representatives from across the political spectrum, and by notable public figures outwith the Green Party.

The membership of Manchester Green Party (hereafter ‘we’) believe that this is wrong: Green politics, and the principle that environmental justice is inextricably linked to social justice, cannot be reconciled with discrimination on the basis of gender. For this reason, we take this opportunity to publicly affirm our commitment to trans positivity, and to reiterate our welcome to people of all gender identities.

We affirm the human, moral, and legal right to self-identify one’s own gender. We affirm that trans women are women, trans men are men, and that all genders (or lack thereof) and non-binary identities are inherently valid. We affirm the right of trans and non-binary people, as with other marginalised groups, to choose the language with which they identify oppressors. We require that all members of the party accept the gender determined by each individual. We regard refusal to do so as transphobia, and affirm that any behaviour which demonstrates transphobia is trans-exclusionary.

Therefore, Manchester Green Party requests that all relevant national Green Party bodies enshrine within the members’ Code of Conduct the clear, unambiguous requirement for respect of all genders and their self-determination. Manchester Green Party further requests all relevant national Green Party bodies to ensure that violation of this requirement, particularly with regard to transphobia and trans-exclusion, shall be a serious, actionable offence under the party’s complaints procedure.

Finally, we affirm that transphobic or trans-exclusionary individuals of any kind are not welcome as members of Manchester Green Party.”